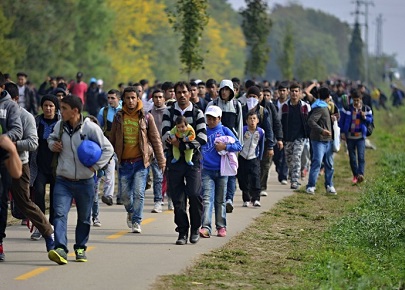 Syria is in the spotlight right now not only because of the civil war that is affecting their country, but also because of the impact that this problem has had around the world.  Mixed in with real refugees are real Muslim terrorists that have one objective, to destroy the culture and freedoms of the United States and Western Europe.  Syrian people are massively leaving the country because there might be no other way to survive, given the escalation of violence. This exodus has also put developed countries in a difficult position: to intervene or not to intervene, to accept refugees or not?

It is not a simple decision. We all want to help the innocent people who are suffering the consequences of the war, but there a lot of implications in doing so. The most obvious one is the economic problem that any country would have to face by accepting so many people who will need to start from zero. The resources that need to be destined to helping refugees out in a first stage are enormous, and it is not something that even developed countries can easily face. Many U.S. citizens are struggling to survive and the country is in bad shape, yet Barack Hussein Obama and others argue we should let more and more in, despite the risks, and the fact that the U.S. cannot afford them.

Without even considering the economic implications and the fact that the U.S. is printing dollars to run the country into an oblivion of debt, there is also a safety issue.  Wymoo investigators have seen an important rise in the demand of investigations related to refugees or Muslims around the world. The world is under tension with the recent attacks of ISIS to the West. The extremists’ objective is to destroy free nations, and the truth is, the enemy now resides within.  As with Rome, great world powers do not fall from an outside threat, but collapse from within.  Evidence of this is taking place now, as illustrated by the recent Islamic attacks in Paris and California.  The risk needs to be dealt with now.

Extremist radicals of ISIS know very well the weakness of politically correct politicians and media spin doctors.  The Mexican border is wide open, and an easy path for terrorists wanting to enter the country.  Guns can be bought legally and ILLEGALLY in the United States, so requiring law abiding U.S. citizens to undergo more comprehensive background checks is not going to solve the problem.

Top U.S. counterterrorism officials say they worry a potential terrorist could be hiding among refugees who are looking to come to the United States after escaping the brutal war in Syria, and there are reasons to believe they are succeeding. Many have put the immigration of Syrians in very simple terms: get them screened, or don’t let them in. But, the government lacks the ability.

Investigations do not work the same in every country, and especially do not work the same under certain circumstances like war. The first thing to consider is that databases have limited capabilities in any country.  In a place like Syria, they rarely exist and the ones that do exist are practically worthless.  Even public records in many developing countries are of no value.  When there is war taking place, information is the first thing that is protected, deleted, hidden, etc. Transparency is not a characteristic of conflicted zone.  Trying to find relevant information on a Syrian is not easy.

Proper investigation and professional background checks require much more than just checking inaccurate databases.  It requires real investigation into a person’s past and identity.

Muslim terrorists have proven that they know how to blend in with the rest of the refugees, and there is hardly going to be evidence of these people´s past. No one knows what they have been doing, and a background check investigation in their country will not help at this time. With ISIS under control, there is no reliable official information that can help the U.S. determine who is a terrorist.

Refugees are entering the United States without any checkpoints and control.  Socialist and democratic politicians love illegal immigration because it helps them buy votes and stay in power.  But, what about the taxpaying citizens who live in the U.S.?   When will commonsense and safety be more important than political agendas?  It’s time to protect the Americans who are truly from America.

Some of these refugees are traveling throughout Latin America with false passports, with the goal of entering the U.S. through the Mexican border. Barack Hussein Obama has failed to protect the borders from the serious outside dangers.  Will the next president take action?

As a private investigation firm with international investigators, we believe in the importance of real background check investigations and screening processes, no matter what the political affiliation or claimed religion of the subject.  In God we trust, in all others we investigate.