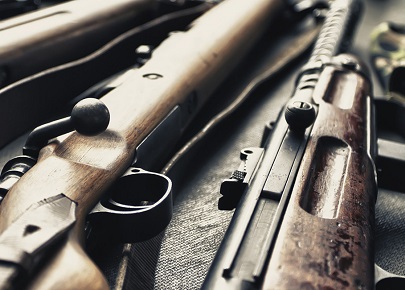 On December 2, 2015, Syed Rizwan Farook and Tashfeen Malik, husband and wife, went to a holiday party for employees of the San Bernardino County Department of Public Health in California. Farook was a U.S. citizen and devout Muslim who recently traveled to Saudi Arabia, and had ties to ISIS.  A neighbor had seen several suspicious, Middle Eastern men at the subject’s house days before the terrorist attack, but did not report the men for fear of being called a “racist” in today’s upside down, politically correct world!  If only people could follow commonsense and take action with no fear from government monitoring, biased media attacks, or even jail time in modern day police states.

The Muslim couple shot and killed 14 people and injured 21 others at the auditorium where at least 100 people were just trying to have fun and share a good time with their co-workers.

The two perpetrators were killed by police after gunfire was exchanged with them while in their vehicle, approximately four hours later. Police and the media emphasized that no motive had yet been discovered, even though the motive was blatantly clear to most ordinary Americans.  The shooter was a devout Muslim who recently traveled to Saudi Arabia before attacking the gathering with assault rifles.  It doesn’t take a rocket scientist to put 2 and 2 together.  Nevertheless, the U.S. is bombarded with propaganda to avoid the obvious, with mainstream media pushing pharmaceutical drugs rather than reporting the facts without bias.  Eventually, the facts were too much to hide.  The FBI took over the investigation as a counter-terrorism investigation connected Islamist extremist views.

International private investigators who work fighting crime all around the globe, have seen how the U.S. is becoming more and more insecure. Wide open borders, and Islamic terrorist intent on killing Americans.  Mass shootings are part of a sick society at times, but the terrorist threat is existential, and even with stricter gun controls on law abiding citizens, terrorist will find a way to kill.

In times when the presidential campaign is intensifying, candidates and politicians in general use these extremely sad events for political purposes. Mass shootings are convenient because they monopolize the media. There might be few topics that move strings so intensely as the killing of innocent people. Politicians are working their campaigns around this topic and immigration policy.

Barack Hussein Obama has been eager go to pass gun control laws and ignore the Constitution and 2nd Amendment, but contradictorily, he has not protected the borders. Protecting the borders would make America safe, but it would not help democrats buy their votes from millions of illegal aliens.  Basically, his argument so far have been that we should welcome terrorists to come in to the U.S., but we should not sell them weapons. Does that make any sense?

Once you have decided to purchase a gun, the store where you´re trying to buy it enters your name and information into the National Instant Criminal Background Check System, or NICS, via a toll-free number or the Internet, and they check the eligibility of the buyer. The check usually takes few minutes to complete. Gun “background checks” currently check several databases managed by the FBI, including the National Crime Information Center, and run an individual’s name through federal and state criminal records. This is not a real background check.  It is a database search.

Gun control laws are not made to stop criminals. As it happens with mass surveillance, the people affected are law abiding citizens who every day lose more and more their rights and freedom. Criminals will always have ways and resources to avoid the law. A background check by checking databases alone will not stop a terrorist from committing an attack. Extremist radicals have no criminal records in the first place! Most of them are described as regular people who inexplicably have been radicalized to commit such barbaric acts. Even criminal organizations like ISIS understand that very well. They will not hire someone who has been in jail and has the police eyes on top of them to perpetrate such attacks; it is meant to be a surprise! So how could a background check for gun control purposes help?

With stricter gun laws, would a Muslim terrorist be stopped?

Extremist radical terrorists will not be stopped just because the gun store on the corner won´t sell them any guns. ISIS is a criminal organization with power enough to find their own resources and supplies, to train their people on how to fabricate weapons and to still carry out their plan.

The Second Amendment to the United States Constitution protects the right of the people to keep and bear arms and was adopted on December 15, 1791.  It is in place to keep power with the people not the government, to avoid the risk of tyranny and maintain the checks and balances between the government and the people the government supposedly represents.  Is having access to guns really the problem? How come we have been able to survive more than a century with people having access to guns? The problem here is not whether or not people can buy a gun. It is a social problem related to cultural differences, mental health and pharmaceutical drugs, and Muslim terrorists.  You won’t hear much about the drug companies being responsible, because that is not good for business.  Drug companies practically control the FDA and are the biggest spenders on ads on television.

Many Muslims not being properly screened, for fear of “racism”

It is true that not all Muslims are terrorists. Religions and cultures should be respected. But it is also true that under today´s circumstances, extremist radicals who are prompt to perpetrate these terrorist attacks are people who are being recruited at mosques. They have a good understanding of what it means to be a Muslim and then they are just being radicalized. Extremist radicals do not come from a reading group of agnostic intellectuals. The people blowing themselves up and killing people are Muslims.  ISIS is not a figment of the peoples’ imagination, it is serious threat to the United States.

Real background checks are investigations, and they need to be conducted by professional investigators who are properly trained.  A database will not decrease your risks!  Farook was an employee at the place where he killed 14 people. A proper investigation could have uncovered any suspicious activities, ties to radical groups or anything that may have seemed like a potential danger.