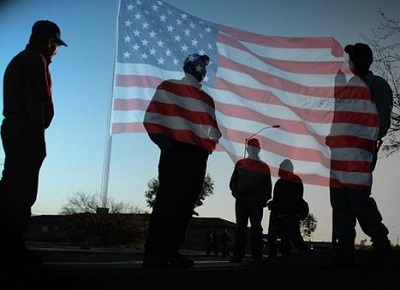 The current government of the United States has had a lot of questioning regarding the way that security and national budgets have been handled. For many, the efforts have been misled from keeping people safe to the government violating citizens’ privacy, from offering equality to putting people at risk, and many limits have been crossed. But the discussion right now revolves around priorities.  How many undocumented immigrants can the United States handle, and why isn’t the government doing anything to stop the flow of them, or enforce the law?  When does it end?

Can a budget be reason enough to put citizens at risk? Having enough budget to guarantee people´s safety is a problem for many third world countries, but it should not be a problem for one of the most powerful nations in the world. The United States has been involved in a lot of controversy due to the actions taken by the Immigration and Customs Enforcement agency (ICE) last year. During the Obama administration, Immigration authorities in the United States released an important amount of undocumented immigrants who had criminal records, and who represent a threat to citizens’ security. The government has showed no interest for protecting people’s safety, and the data breach in the Obamacare website is a good example of this. Now, citizens have to worry about a new level of negligence regarding security.

If the government knowingly allows undocumented immigrants to remain in the country, and apprehends but then releases serious criminal illegal aliens, many of whom have a history of rape or homicide, how can citizens possibly trust their government?

According to the official information revealed by ICE, the agency faced a $90 million budgetary shortfall and had spending cuts that were imposed by sequestration, forcing the immigration agency to release thousands of immigrants in February of 2013 in order to save money.  Voter fraud has revealed that thousands of illegal immigrants are now voting and skewing election results, but no one is enforcing those laws either.

Initially, the Obama administration´s assurances to Congress and the public were that the people who that had been released were characterized as non-criminals and low risk offenders who did not have serious criminal histories, therefore did not represent a risk to public safety.  But, evidence has now revealed that this was not the case at all.  With so many illegals flooding into the country, and so many criminals being set free, there is simply no way to keep track now that America has become a land where the law and taxation only applies to citizens.

Official government records obtained by USA Today, have revealed a whole new dimension of the issue. Murderers, kidnappers, drug traffickers and sex offenders were amongst the illegal immigrants released last year by U.S. Immigration and Customs Enforcement officials, contradicting claims by the Obama administration that it did not release detainees with serious criminal histories.  In several cases, the releases committed additional serious crimes against U.S. citizens.  While the main stream media may not report it, there are victims across the country who have died at the hands of illegal immigrants.  U.S. prison populations show this clearly, as the U.S. has become a haven for undocumented criminals.

It has gotten so bad, that local jails are now refusing to hold illegal alien offenders in the U.S.  Only the hard working U.S. citizens are required to abide by the law, and are held accountable if found to be violating a law.  Skeptics say illegal aliens are turned lose because there is no money be made by arresting them or prosecuting them, and they are set free in the country putting citizens at risk.

In fact, the U.S. government freed 36,007 criminal immigrants and knowingly put the public at risk by doing so.  When confronted with the facts, government officials denied it.  Records show the crimes committed by illegal aliens released from federal custody include homicide, sexual assault, theft, kidnapping and alcohol-related driving convictions.  For taxpaying American citizens, clearly this is a cause for concern.

After the administration released the illegal aliens, an investigative reporter asked for records that would shine some light regarding who were the people set free. The records obtained included a list of people with criminal records that had faced serious charges, unlike what was assured to the Congress. Aggravated kidnapping, sexual assault to a child, weapons assault, drug trafficking and others were amongst this list.  What is more shocking, is that private investigators say the majority of criminals in the world have no criminal record, especially in developing countries like Mexico, Honduras and Guatemala.   The truth is, the records found are for crimes committed in the U.S. only, and possibly the tip of the iceberg.

Why were the illegal aliens -who belonged to the list of violent offenders- released remains a mystery. But one of the most concerning issues is that the administration misinformed the Congress –the highest authority in the country- and the public to get away with it.

If something like this happens because there is not enough money, then the country really needs to rethink its priorities. Millions of dollars are being spent on things that are far less relevant than public safety. Why would the first economy in the world be cheap regarding its own public safety?   Why are illegal and undocumented immigrants being given the top priority and a huge amount of resources, when America and its citizens can hardly afford it?  With millions of citizens unemployed and struggling to pay the bills, should catering to illegal immigrants be a priority?

International investigators say the problem is likely to get worse before it gets better.  As the Obama administration fails to protect America’s borders and enforce the law, setting lose serious criminals across the country, there is a signal being sent to the rest of the world.  Millions of other people in third world countries are getting the message, that now is the time to cross the border illegally into America.  Now is the time to take advantage of the country and take whatever you can.  There are no laws, there is free food, free shelter, free citizenship, free government benefits!

When will the voice of the citizens be heard?  When will the government enforce the law equally and for all?  Will the U.S. reach its tipping point and sink, under the weight of government debt and millions of illegal immigrants?   We hope not.